I Was A Bridezilla. That’s A Good Thing.

Once upon a time, a Desi bride woke up bright and way too early (*cough* 3 am *cough*) on her wedding day.

“This is it!” she happily thought, as she sat by the window of her hotel room and began her metamorphosis from ordinary human being to painted Indian goddess.

4 hours and not nearly enough coffee later, covered in yards of fabric and pounds of jewelry, she made her way through the labyrinth of hotel elevators and hallways for her first look with her husband-to-be.

She pushed the doors open, lifted her heavy crimson red lehenga to free her feet, and with a smile from ear-to-ear, took her first eager steps forward to greet her man until—“What the f* is he wearing?!”

She squeezed her eyes shut in case it was just her, delirious from the lack of sleep, food, and caffeine, hallucinating this hiccup on her wedding day.

Nope, it was real.

Instead of the crimson red fabric that was dyed specifically to match her outfit—which she herself put in the hands of relatives to give to him that very morning—paired with his cream and crimson sherwani, gold shoes, and gold and red embroidered talwar (sword), was a bubblegum. Pink. Turban.

Furious that her family found ANOTHER way to do what they thought was best (they had it in their heads that all men would wear pink turbans, groom and bride’s outfits be damned), she started to wonder if she was asking too much.

Was it unreasonable for her to be angry that her groom wasn’t wearing what he was supposed to?

While she alternated between feelings of blind internal rage and hopeless resignation, her savior of a photographer asked her one meaningful question:

“When you look back on these pictures 10 years from now, will that pink turban piss you off?”

And that was all it took.

15 minutes and a litany of cuss words later (directed at the men refusing to change my groom’s turban without “permission from my father.” Seriously?!), we were both wearing the right outfits and repeated our first look.

What’s the moral of this story? Well, there are several.

The first is that, just like every other wedding taking place all over the planet, people will say and do things throughout the entire damn process to highlight the fact that “HAHA this wedding ain’t about you!” Message received, loud and clear.

The second is that Desi brides have. It. rough. Under the guise of well meaning help and advice, people are going to try to bulldoze you out of every wedding decision that you make. Case in point, my relatives intentionally dressing my clueless groom in the wrong effing turban.

The third point, and this is by far the most important point, is that when your inner bridezilla comes out, welcome that bossy b* with arms wide open and let her do her thing.

If you’re confused about why I’m advocating for more bridezillas, let me explain.

This isn’t a license to be hateful or spiteful or petty just for the sake of being all of those things.

In fact, let’s just be clear that the term ‘bridezilla’ is sexist AF (not after we reclaim it). OF COURSE they try to malign us when really, it’s just us knowing what we want and expecting our support systems to follow through (sounds pretty reasonable to me!).

TBH I toyed with it. tried to do it with the seating arrangements and through invitations. But (A) it’s not a cute look, and (B) I was foiled by both sets of parents.

However, when it comes to YOUR wedding day, and let’s be real, this day wouldn’t be happening if not for you and your partner choosing to commit to one another, there are definitely things worth fighting for no matter how trivial others may perceive them to be.

Gone are the days when women walked towards the mandap without knowing who was underneath the sehra waiting for them.

Gone are the days when your extended family members run around giving orders to vendors and making executive decisions about your events.

Gone are the days when everyone gets what they want and the bride comes last.

Give yourself permission to fight for the wedding that you dreamed of. I don’t mean forcing your parents to cover a million dollar wedding when your budget is a fraction of that. But it does mean fighting for the photographer that you love, or pushing back against your decorator who refuses to understand your vision.

Family adding to your stress? Tell them to have several seats. Because at the end of the day, what matters is that when you look back at your wedding, you should be in control of how it’s remembered, not other people.

It’s been 5 years since my wedding day and my favorite photos from the whole weekend are from our first look.

Sure, it was the second try. Yeah, even though my husband is wearing the crimson red turban, I still remember the pink turban fiasco like I’m reliving the experience all over again.

But instead of seeing pink in the photos and red in my eyes, I see two people in love laughing about our shit show first look and the insanity of our wedding weekend.

And instead of remembering the pink turban story with sadness and defeat, I remember that I fought back and won. 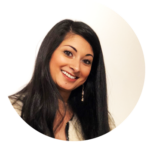 Content strategist and UX writer who’s been researching and writing about weddings for 5 years. Addicted to Netflix, dirty martinis, and naps. Christmas Gift Guide For The Bride-To-Be In Your Life Every Thanksgiving And Black Friday Sale On South Asian Wear If You Live On Social Media, Follow These Accounts For Wedding Planning Feel The Magic Of The Holidays With These Snowy Weddings